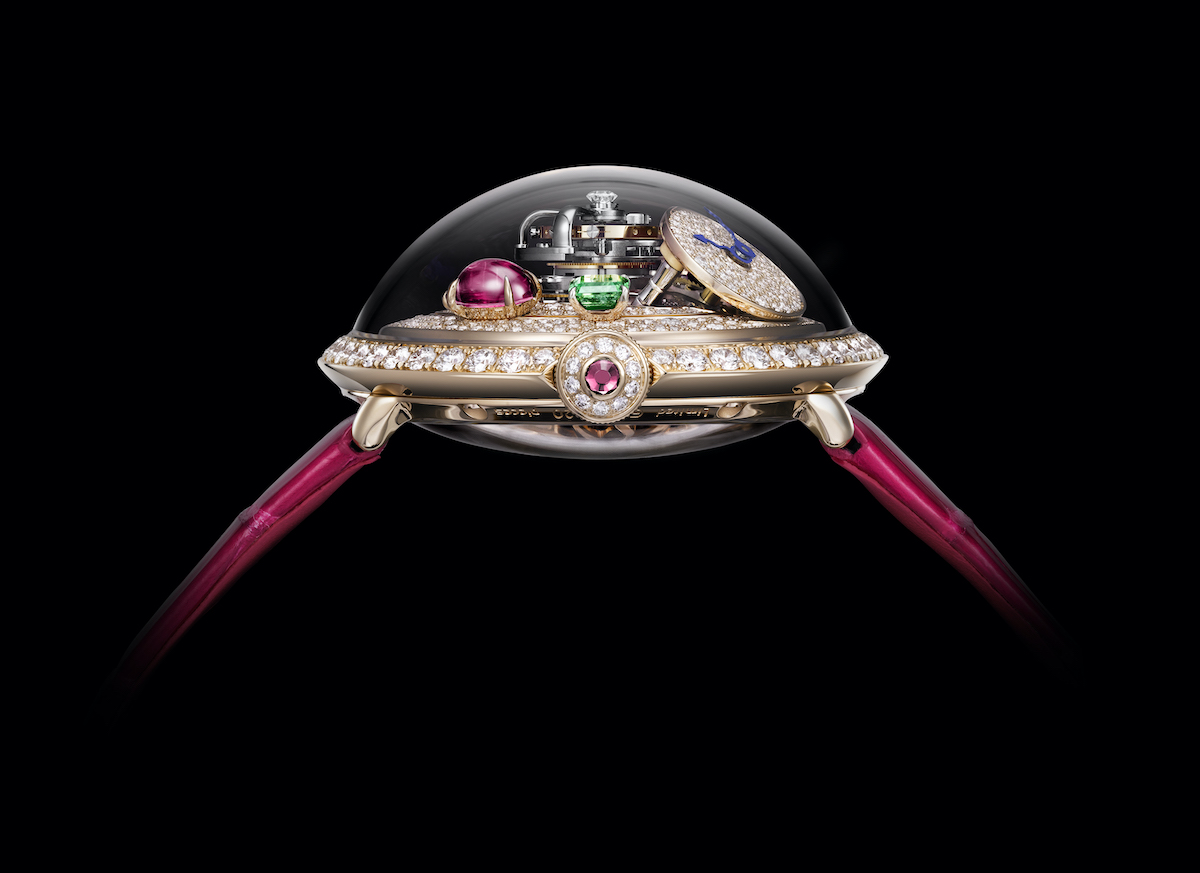 Collaborations between brands in the watch world  have become more and more prevalent, especially between the independent watch brands that typically recognize each other’s strengths and join forces to capitalize on them. Every once in a while, though, we also witness partnerships between power-house big brands owned by luxury groups and the mightier independents. Such is the case with the newest collaborative timepiece made by Bulgari and MB&F. Unveileld during last week’s Dubai Watch Week, the Legacy Machine FlyingT Allegra is an incredible reflection of the skilled knowledge and prowess of both brands in a gem-set space-age looking three dimensional watch that proves space is not the final frontier. 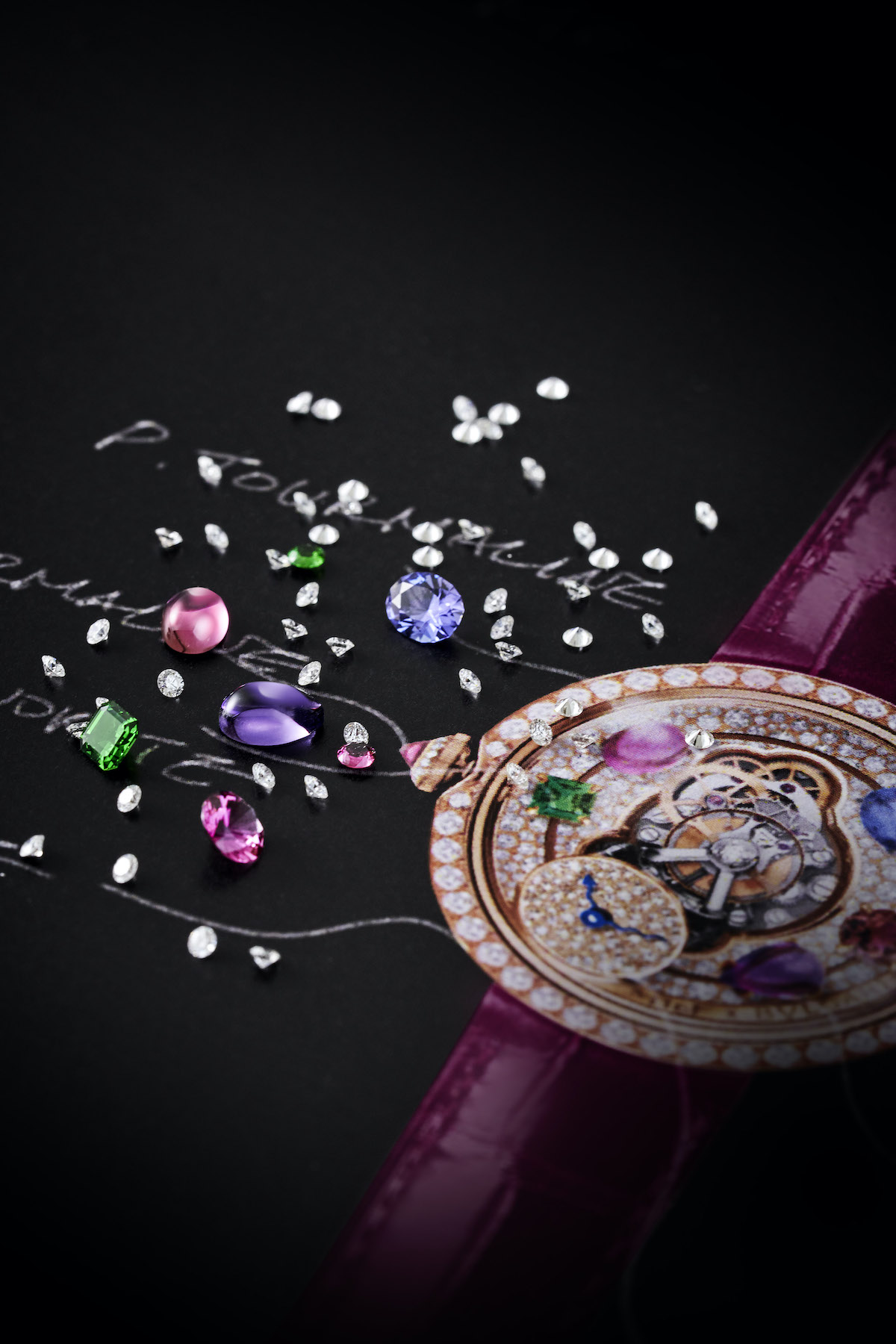 MB&F (Maximilian Busser and friends) was founded 16 years ago in 2005 and has always been about creating horological masterpieces unlike anything else on the market. The 20 remarkable calibers already created by the brand basically take watchmaking to new heights by deconstructing the movements and re-conceiving the notion of how time is displayed. All of its watches unveiled since the first in 2007 are referred to as Horological Machines (HM) and many play on themes that capture hearts, from animals to race cars, spaceships and more. 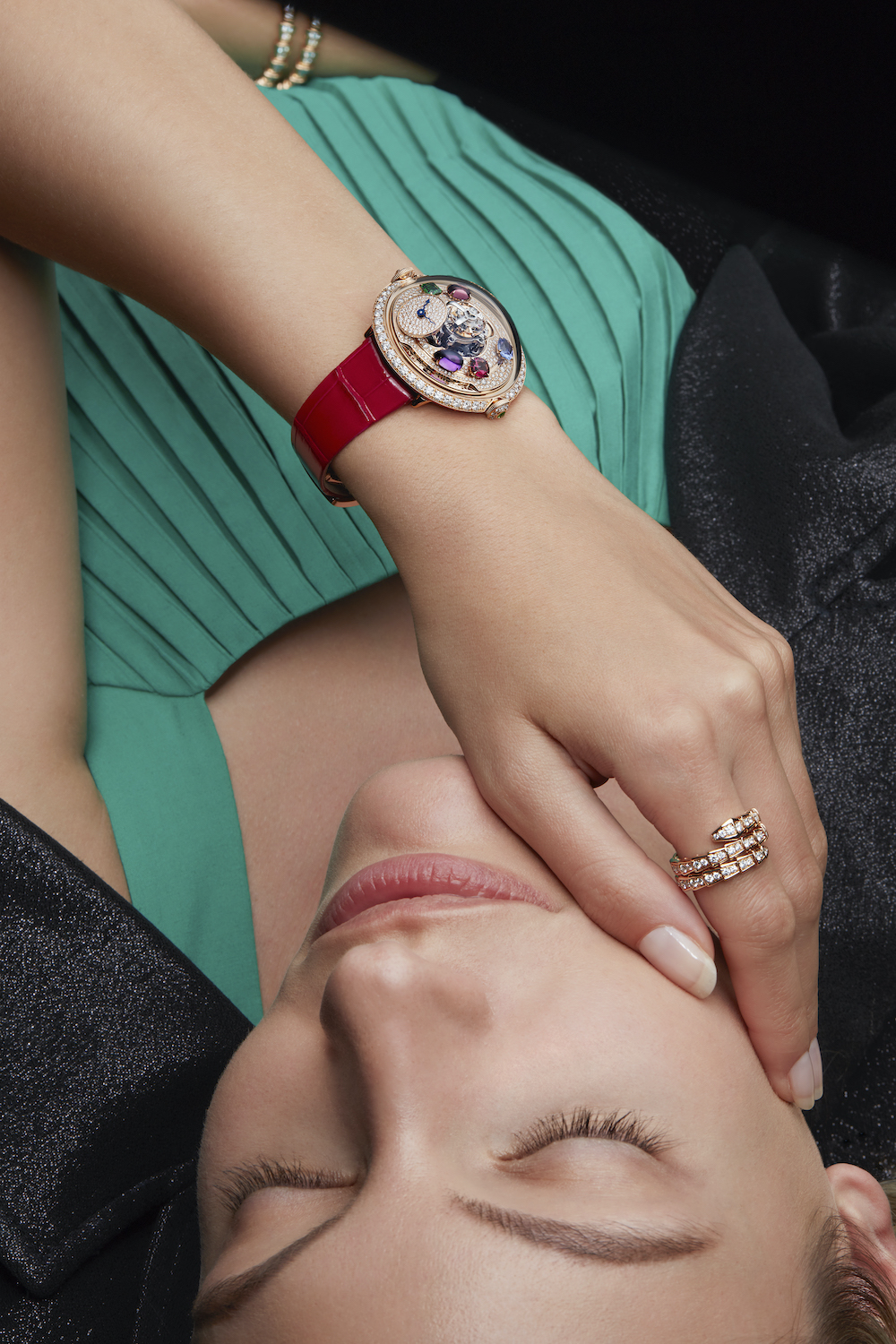 The Roman house of Bulgari most likely needs no introduction. Part of the LVMH Group, Bulgari was founded in 1884 and fast became known as a jeweler extraordinaire thanks to its bold and beautiful use of colorful gemstones in cabochon (raised rounded) cuts. The brand has since added other luxury goods to its repertoire including fragrances, leather goods and watches. While its watches are made in Switzerland, the designs and concepts are born in Rome under the vigilant eyes of Bulgari’s think-outside-of-the-box Product Creation Executive Director, Fabrizio Buonamassa Stigliani.

Some might think the pairing of the radical independent and the record-setting, statement-making dynamo that is Bulgari is an unlikely duo, but the FlyingT Allegra will  have them thinking again. When they opted to work together, these two innovative creators revisited the beloved FlyingT (tourbillon) watch that was MB&F’s first-ever women’s watch, created in 2019 and named for Busser’s wife, Tiffany. 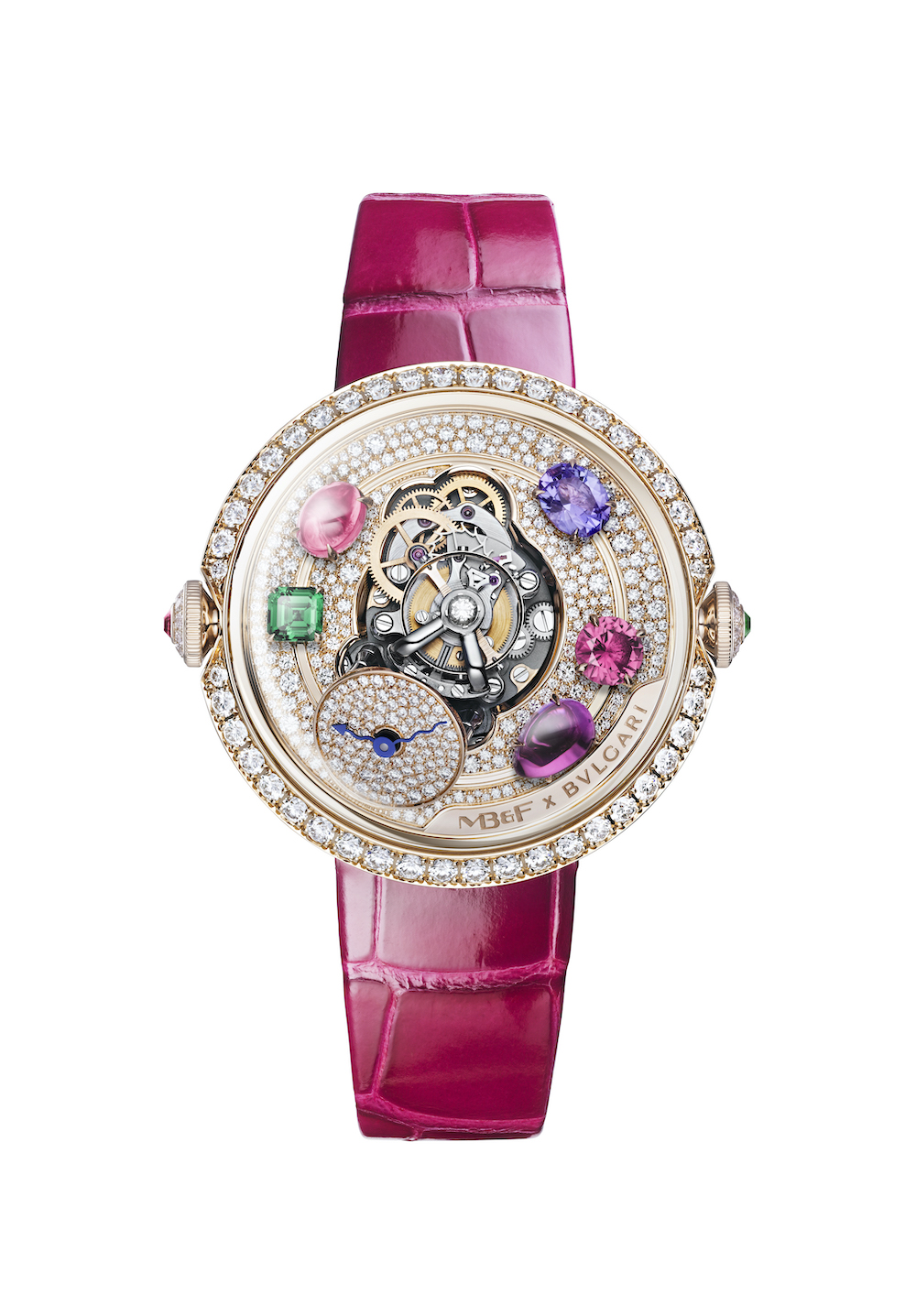 The limited edition MB&F x Bulgari Legacy Machine FlyingT Allegra watches are set with approximately six carats of gemstones depending on the model.

The spherically shaped FlyingT with highly domed sapphire crystal boasts a movement that is built vertically along a central axis so that the mechanism and the majority of its 280 elaborate parts are entirely visible. Even the small dial that showcases the hour and minutes hands is placed on a 50-degree angle so as not to obstruct the view. The constantly moving flying tourbillon escapement (which compensates for errors in timekeeping due to the effects of gravity when the watch is in different positions on the wrist) projects beyond the main dial plate and resides atop the mechanism adding stunning visual appeal.

This is the watch that Bulgari and MB&F opted to collaborate on, and that was unveiled to the world today at Dubai Watch Week. Bulgari wasted no time working its jewelry and watch design prowess on the mechanical wonder. Step one: entirely redesign the case for a more futuristic profile – one that could be magnificently set with diamonds and colored gemstones. 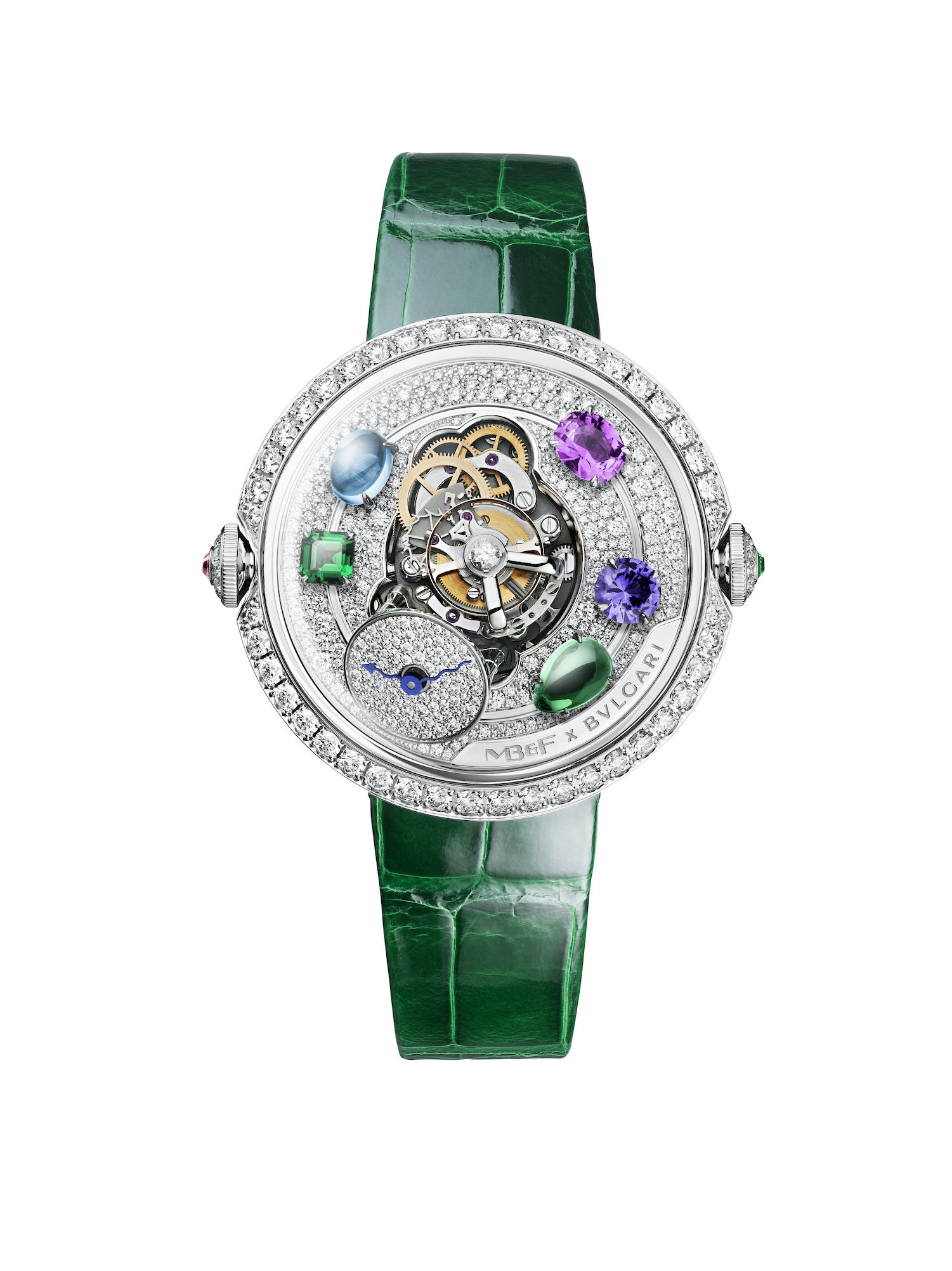 Just 40 of the MB&F x Bulgari Legacy Machine FlyingT Allegra watch will be made: 20 each in 18-karat white gold and rose gold.

Each of the limited-edition pieces is meticulously set with diamonds on the main plate, the tiny dial and the case. Then, in a monumental statement of femininity, each is set with a curated series of fancy cabochon cut gems including tourmaline, tsavorite, rubellite, amethyst, tanzanite or topaz. However, unlike most gemstone-set watches on the market, these majestic stones are not cut into tiny stones and pave-, snow-or baguette set. They are large single stones that sit atop the diamond dial plate and surround the mechanism – saluting its beauty as well. The two crowns – one on either side of the case – are set with cabochon stones, as well.

Just 20 pieces will ever be made in 18-karat white gold and 20 pieces in 18-karat 5N rose gold. The white gold models are set with more than three carats of diamonds, and boast three tsavorites (one each in square, pear and round shapes) weighing 1.33 carats, one oval topaz (0.71 carats), one oval amethyst (0.4 carats), one round tanzanite (0.43 carats) and one round tourmaline (0.06 carats). In total, the watch, with  a striking sun-shaped rotor visible via its  case back, flaunts almost six carats of gemstones. The white gold version is finished with a green alligator strap. 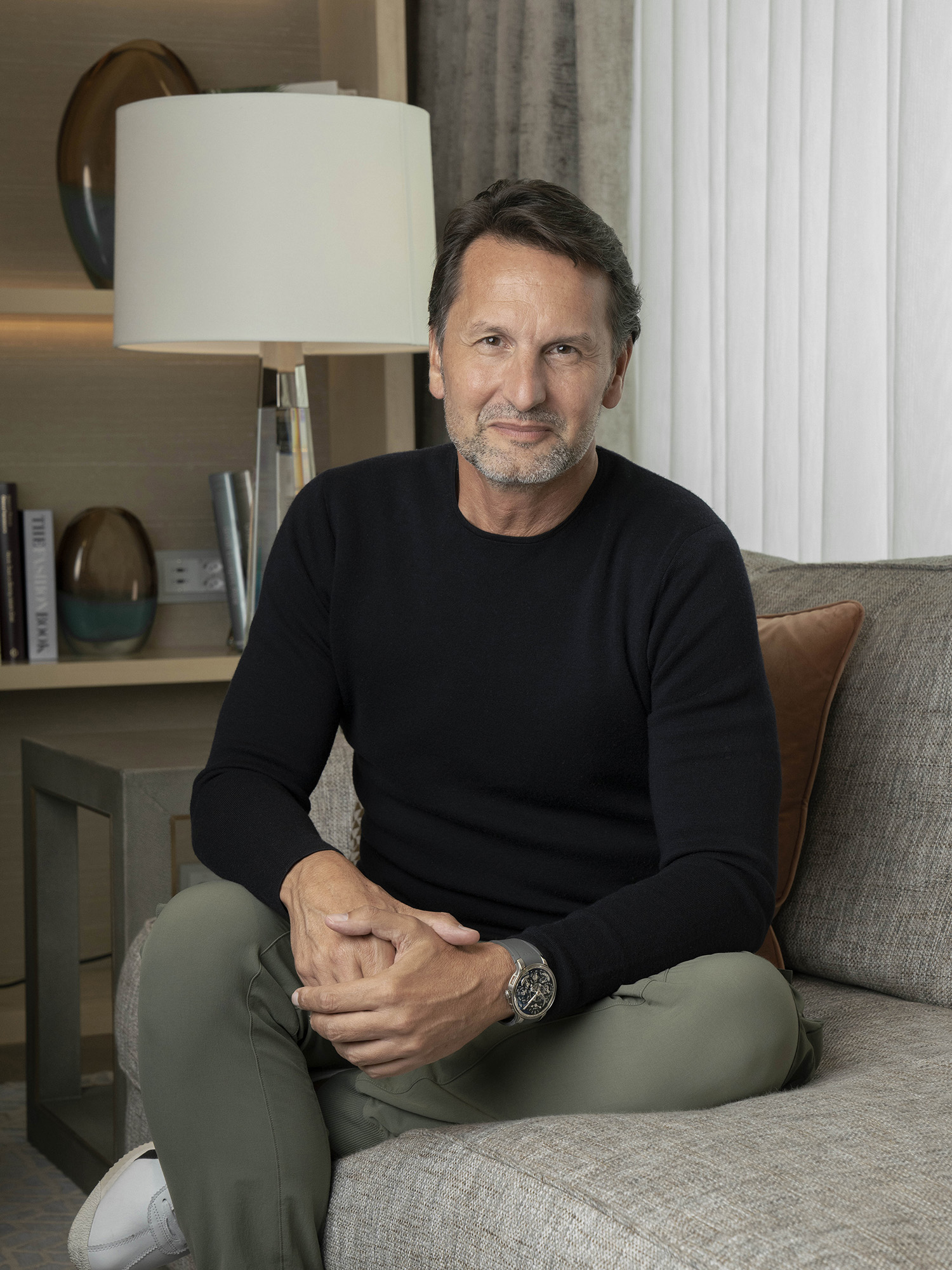 The 18-karat rose gold FlyingT Allegra is also set with more than three carats of diamonds on the case, dial, mainplate and buckle, but this one is set with two tsavorites (one square and one round) weighing 0.38 carats, two tourmalines (one oval and one round) weighing 0.64 carats, an oval tanzanite (0.47 carats), a pear-shaped amethyst (0.70 carats) and a round rubellite (0.39 carats) – for a total carat weight of more than six carats.  The rose gold version is finished with a deep pink/red alligator strap. 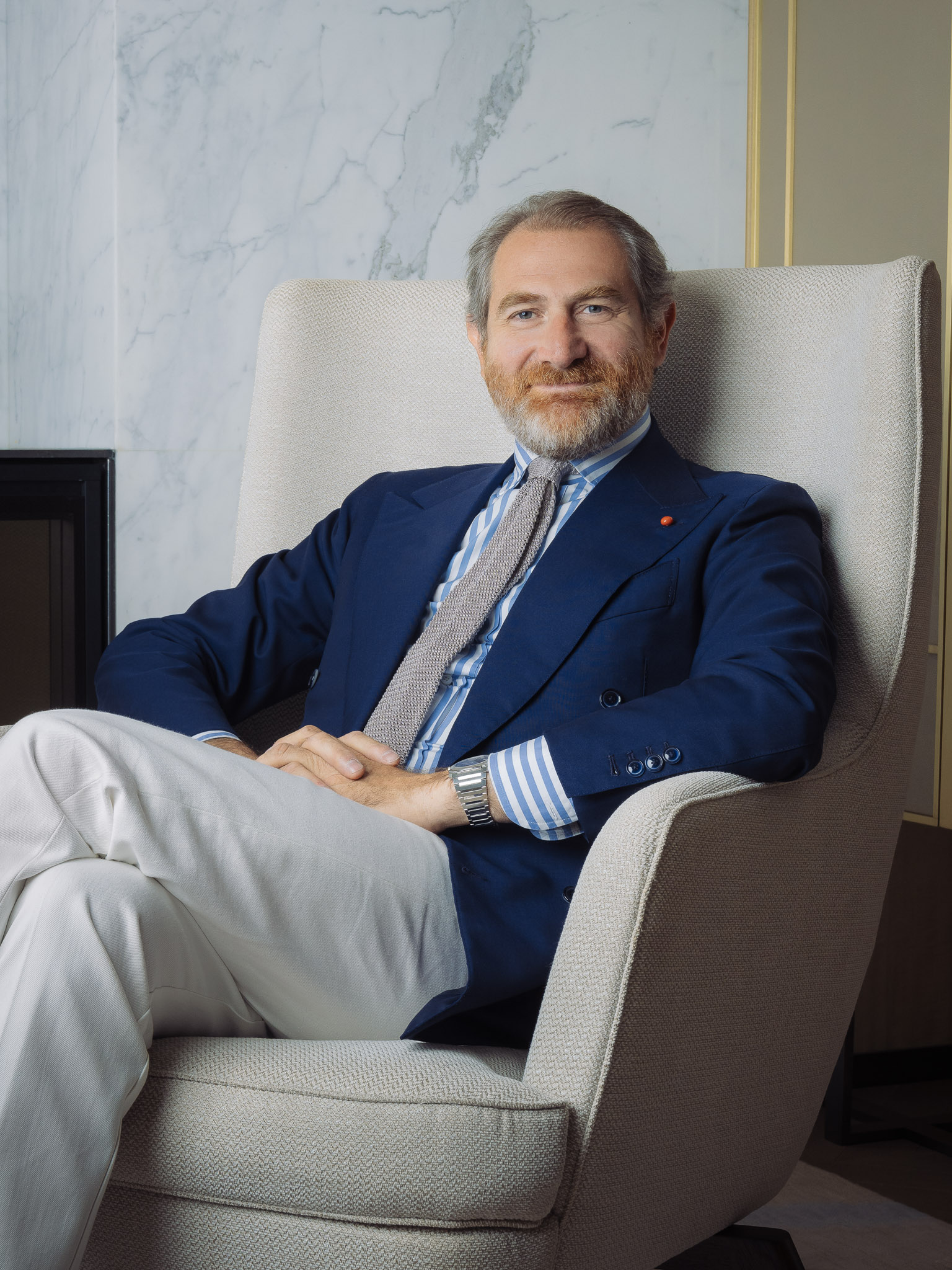 The result, the complicated high-jewelled FlyingT Allegra by MB&F and Bulgari, is an exceptional blend of creative forces. This is no ordinary watch, it is designed for the daring women of today who want to command attention with a timepiece that flaunts superior mechanical brains and sophisticated, impactful beauty.   Each watch retails for approximately $185,000.

The exceptional FlyingT Allegra is not the first time MB&F teamed with a big jewelry house. In 2010, it worked with Parisian house, Boucheron, to create the HM3 JwlryMachine – a striking owl-shaped watch complete with conical gem-set eyes that display the hours and minutes, and a body set with amethysts, sapphires and diamonds. Two different colorways were created, with the second one predominantly set with rose quartz and rubellites. 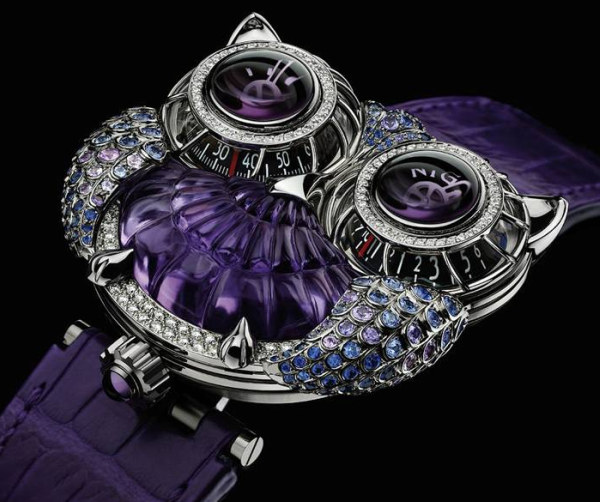 I Went To The Seaglass Rose’ Experience With Corum, Here’s What Happened
November 30, 2021