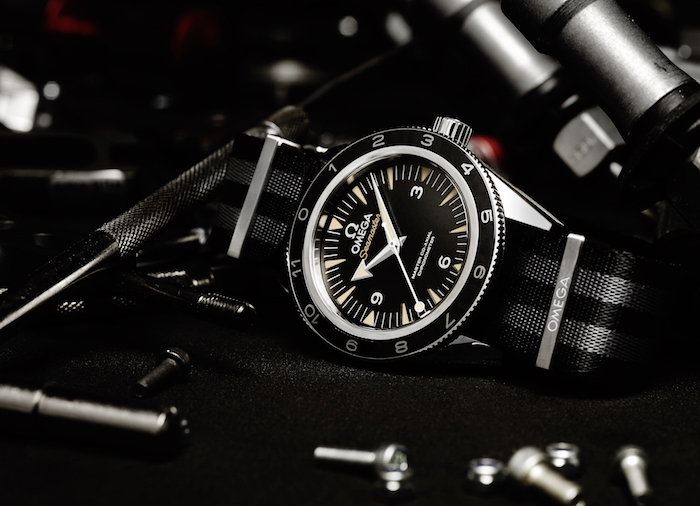 Last night in New York, and the night before in Connecticut, special guests were treated to a private screening of the new James Bond 007 movie, Spectre — which hits theaters today. Actor Daniel Craig  (Bond) sports an Omega watch throughout the movie — as has been the case for years. In Spectre, as Bond covers ground from South America to Morocco on the trail of a new terrorist coalition (Spectre), the fractions of a second remain all too important — and Bond couldn’t time them without his Omega.

In honor of the 24th James Bond movie, Omega unveils the Seamaster 300 “SPECTRE” Limited Edition watch, we we brought to you here back in August.  The watch houses the Omega  Master Co-Axial calibre 8400 inside a 41mm stainless steel case with bi-directional, rotating diving bezel, and a 12 hour scale made from black, polished ceramic. The bezel uses Omega’s signature LiquidMetal®. The OMEGA Seamaster 300 SPECTRE Limited Edition is created in just 7,007 pieces.

In addition to the new Bond watch, Omega has announced that Spectre actress Naomie Harris, who plays Eve Moneypenny in the newest James Bond Saga, has joined the brand to help celebrate the movie, the timepiece, and the launch of  a special expansive exhibit that highlights the strategic 20-year partnership between James Bond and Omega.  The exhibit opened in Berlin and in Los Angeles on November 1and will remain open for several weeks.  You may enjoy the below video that gives a glimpse into the action-packed movie and Omega’s role.