Tonight, the TimeCrafters show in New York is open to the press for previews before being open to the public tomorrow (Friday) and Saturday.  With so many things to see, several brands pique interest with displays and concepts. Chopard offers a visually alluring display that focuses on the the moon and stars, and celebrates the level of reliability and precision reached by its L.U.C moonphase calibers – all achieving chronometer certification from the Swiss Official Chronometer Testing Institute (COSC).

The L.U.C Moonphases – a series of three exceptional models – have propelled the L.U.C collection to new heights in the haute 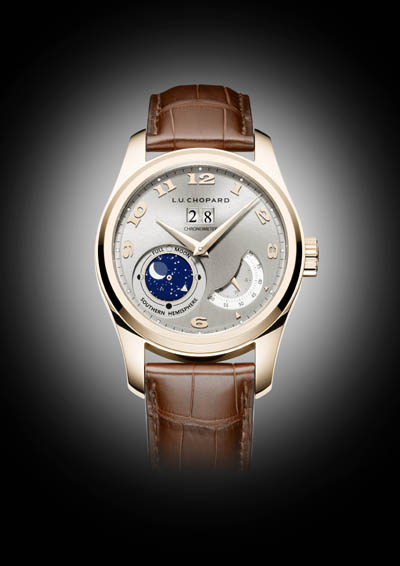 L.U.C Lunar Big Datehorlogerie segment of the watch world.  These watches have several features of distinction. The moon phases of L.U.C Lunar watches orbit around the small second’s axis on a subdial conveying the starry canopy of space. Two juxtaposed discs serve to give life to the moon on the dial, and to distinguish each of its phases. The complete lunar cycle of L.U.C calibers with moon-phase display corresponds exactly to 29 days, 12 hours and 45 minutes, thanks to a 135-tooth wheel — requiring a (one-day) correction only once every 122 years. The moon-phase indication is independent of the other movement functions so it can be adjusted at any time without risk of damage. All the constellations visible year-round in the Northern hemisphere (in Geneva, where Chopard is headquartered), are faithfully represented on the disc of the L.U.C 05.01-L movement. Both Northern and Southern hemispheres are simultaneously visible on the dials of the L.U.C Lunar Big Date and L.U.C Lunar Twin.

Of particular note, the L.U.C Lunar Twin is a sophisticated treat that lets the wearer own a piece of the sky on the wrist. On this piece, the moonphase display indicating the two hemispheres is elegantly off-centered at 1:00, balanced beautifully with a small seconds at 9:00 and a date at 4:00. It is equipped with the proprietary self-winding L.U.C Caliber 96.21-L, featuring the brand’s 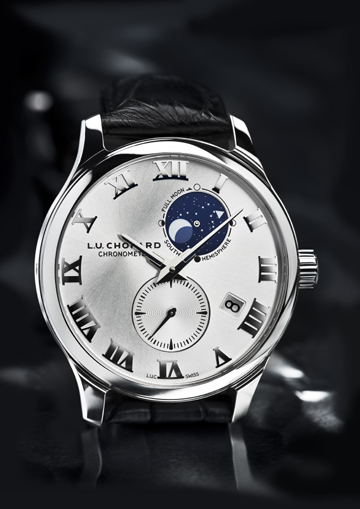 L.U.C Lunar Twinpatented Twin® technology. The two sets of stacked barrels deliver 65 hours of power reserve. The 40mm watch is voluptuously curved and offers optimal readability. This watch is a highlight of TimeCrafters 2012 for Chopard.