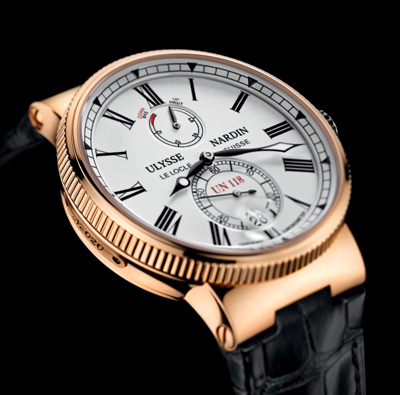 Last year, Ulysse Nardin announced the brand’s newest in-house-made caliber, the UN 118. It was not yet finished and housed in a case. Now, it is – and this is one sweet looking piece that is loaded with patents and accomplishments.

The escapement of Caliber 118 is produced in collaboration between Ulysse Nardin and Sigatec in Sion, Switzerland. Sigatec is the only company in the world capable of producing high-precision components both in Silicium and DIAMonSIL; a nanotechnology which has taken many years to develop. DIAMonSIL is a revolutionary alliance of silicium and man-made diamond. It is an extremely light but hard material that eliminates friction and removes the need for lubrication of the escapement –a watchmaker’s dream.

Caliber 118 features a patented DIAMonSil escapement, in-house produced oscillator (that was patented in 2007) fitted with a silicium 1.1.1 hairspring. The COSC-certified 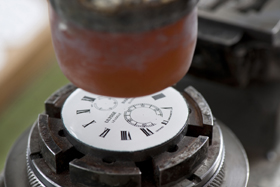 movement is comprised of 248 pieces and 50 jewels, and offers 60 hours of power reserve. It is fitted in an all-new Marine Chronometer case and is being built in titanium and steel and in titanium and ceramic, there will also be a series in rose gold with an in-house-made (by Donze’ Cadrans, which the brand now owns) enamel dial..

The Caliber 118is not the first in-house crated, developed and built movement, but it is the first to go into more than just an extremely limited series. It also has the possibilities to add more complications in the future. As such, it marks the beginning of a new era for the brand.

“With this movement we prove we can remain independent – it is a tremendous step for us,” says Patrik Hoffmann, CEO of Ulysse Nardin. “So this is the start of a new era for us because we are really turning now to in-house production, not of a few hundred pieces a year, but of a few thousand.”