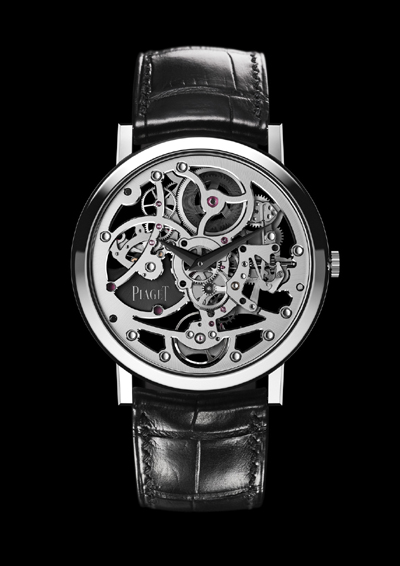 Piaget – famed for its pioneering and leadership position in the work of ultra-thin calibers – has done it again. In just about 10 days at the SIHH in Geneva, the brand will be unveiling to the world the skeletonized Altiplano Ultra Thin, which was several years in the development stages, and requires months to build a single piece.

This watch boasts two world records – it is the thinnest self-winding skeleton model (at 5.34mm) and houses the world’s thinnest self-winding skeleton movement (2.40mm).  The Piaget 1200S ultra-thin skeletonized movement is completed developed and made in house by Manufacture de Haute Horlogerie Piaget. With a range of 18 ultra-thin movements in its repertoire and five skeleton calibers, Piaget is an expert in this field with untarnished credibility and unparalleled expertise. The newest skeleton, however, required ever more vigilance in its finishing and engraving work, as the 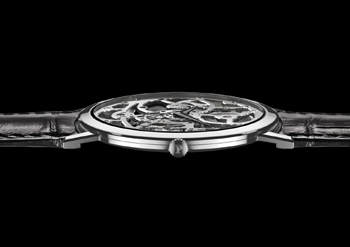 caliber components are obviously among the thinnest, as well. The long curves that extend across certain parts, such as the mainplate and bridges, ensure necessary firmness and resistance – all of which was carefully thought out in the visionary design process.

“The skeleton is the most difficult and delicate to create and decorate. It takes three to six months to produce a skeleton watch, with much of that time used to realize the high-decorated plates and components. Only about 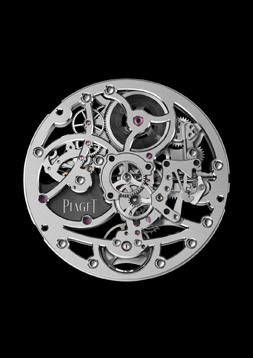 10 watches per month can be finished by the one woman who specializes in this Skelton decoration,” explains Philippe-Leopold Metzger, CEO of Piaget.

The stunning, resolutely modern skeletonized caliber is housed in a 38mm white gold case specially designed for it. An exceptional beauty, the watch features a platinum micro-rotor and 26 jewels.  The surfaces are alternatively finished in matte sunray brushed or sand blasted for excellent contrast on the polished angles. In all, the new world’s first is a harmonious blend of high-technology and artistic prowess that only Piaget could achieve.