Watch Stops 2011: SIHH Cartier Gets Control of Gravity with the Astroregulateur 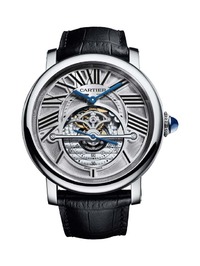 An incredibly original movement that was five years in the making and has four patents pending, the 9800 MC Calibre, housed in the Rotonde de Cartier Astroregulateur watch, was unveiled today in Geneva and is Cartier’s answer to the effects of gravity on the mechanical movement. Heretofore, the only movement that could compensate for the effects of gravity on a mechanical watch when in a vertical position was a tourbillion escapement.

With the Rotonde de Cartier Astroreguateur, the ingenious solution to compensating for gravitational effects focuses on the rotor – the only part of the watch that always returns to the same position even in the vertical plane.  To maintain the center of gravity in one position, the escapement of the watch is connected to the rotor and mounted on the front of the watch dial, visible to the wearer.  The sub-seconds dial is also attached to the rotor, and rotates with the rotor for a constantly moving visual appeal. The pendular seconds hand rotates around the sub-seconds dial in a normal spin. All of this is accomplished via two differentials that transform the wrist speeds into one single constant speed to the micro-rotor, which has five times more components than a tourbillion escapement.  The caliber 9800 MC is a 43-jewel movement with 80 hours of power reserve and 281-parts. Just 50 limited, numbered pieces will be produced of the Astroregulateur in a niobium-titanium alloy case. The retail price has not yet been established, but this watch is a true beauty to behold.