Tag Heuer is no newcomer to the world of automotive adventures. We’ve been loving this brand’s 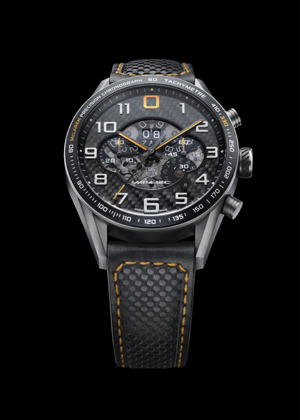 strong Monaco and Carrera watches since it burst onto the racing world scene long before it even had “Heuer” attached to its name. Made even more legendary on the wrists of celebs such as Steve McQueen in historic movies, and on today’s race car driving  icons, TAG Heuer just exudes racing rigor in its DNA.

As such, it comes as no surprise that the brand, along with McLaren Automotive, would venture forth to team up once again and combine their performance-oriented zeal in another unique timepiece.  Those in the know may recall the first venture of the two – dating back almost a decade now to 1993 when they released the McLaren F1 road car and subsequent watch. Now, the new TAG Heuer Carrera MP4-12C Chronograph features an exclusive design that builds off of the high-performance McLaren car.

The watch, built in a limited edition of 1,000 pieces, is available for purchase only at McLaren showrooms and on www.mclaren.com. It  features a carbon-based dial (inspired by the MP4-12C’s carbon fiber chassis) with sapphire crystal inserts to reveal the 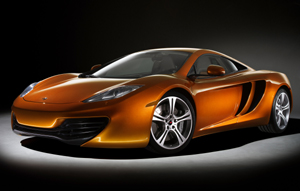 movement (or engine) – a high-tech marvel used for the first time in a TAG Heuer watch.  The Dubois Depraz Caliber 4900 automatic flyback chronograph with semi-perpetual calendar offers big date and month indicator. The chronograph case is ultra light-weight titanium grade 2 and the strap is alcantara (the same as the interior leather of the car). While this watch is pretty to look at in pictures, it’s even better on the wrist.