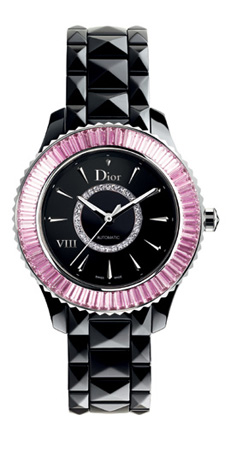 Not that you wouldn’t expect a grand House like Dior – one of the most commanding icons in the haute couture world – to do diamond and gemstone timepieces superbly … but this year, Dior has pulled out all the stops. The brand has unveiled an entirely new collection that is at once both fascinating and alluring. Called VIII – named for the street number in Paris that is its home – the collection offers both diamonds and gemstones as adornments on its timepieces.  There are several lines in the new series, including the Dior VIII 33mm Automatic Lunettes Baguettes – set with baguette diamonds or colored sapphires on the case, and with an inner ring of diamonds on the high-tech ceramic timepiece. Additi onally, and ever more enticing, there is a stunning series with diamonds set on the dials in high-jeweled forms that emulate couture styling and in renditions of bubbles or other majestic designs. We will have more to come on this series shortly!