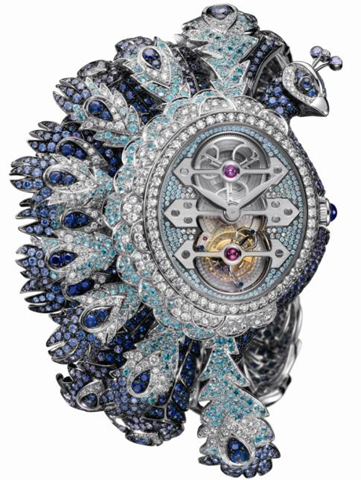 Known for centuries as one of the great innovators in the jewelry world, the great House of Boucheron has teamed with Girard-Perregaux to bring timepieces of haute horology and haute joaillerie to the surface time and again. The brand’s newest one-of-a-kind Hera Tourbillon is an amazing example of beauty and awe that demonstrates the French brand’s amazing savoir-faire.

Beating at the heart of this peacock timepiece is one of the most iconic movements in the history of watch making, the instantly recognizable Three gold Bridges Tourbillon from Girard-Perregaux. The mechanism is set with two different shades of green tourmalines, along with diamonds, to create the body of the peacock. A ring of 52 round-cut diamonds encircles the watch case to form the body of the alluring sculpted peacock, whose feathers are set en-tremblant – meaning they move with wearer’s movements. The Peacock consists of more than 35 carats of diamonds, Paraiba tourmalines and sapphires. In fact, the entire bracelet is set with 271 diamonds, 868 blue sapphires, 426 purple sapphires, 310 tourmaline Paraibas and one blue cabochon sapphire.

The now iconic Three gold Bridges Tourbillon movement is a descendant of the caliber Constant Girard-Perregaux presented at the 1889 Paris Universal Exhibition. It garnered a gold medal for the master watchmaker the same year that Frédéric Boucheron was also an award winner in the jewelry competition. Before being embellished by Boucheron’s renowned craftsmen (with 160 tourmalines and 18 diamonds), the mechanism has been hand-finished to the highest standards. The tourbillon alone weighs 0.3 grams, has 72 different components that fit within a one centimeter diameter. The Girard-Perregaux GP 9700.0A movement is an automatic wind calibre that beats at 21,600 vibrations per hour. The magnificent watch is expected to retail for just under $1 million.