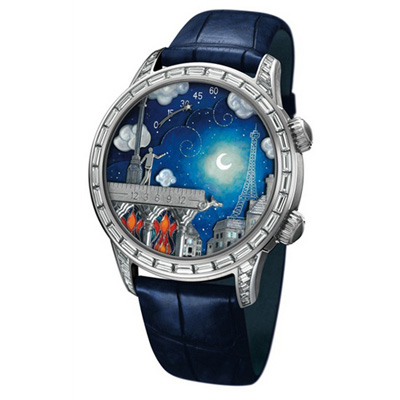 Five years ago, the brilliant creators and craftsmen at French brand Van Cleef & Arpels began a poetic legacy – a concept of Swiss watchmaking and Parisian design that was destined for greatness. The idea was to create a series of watches called the Poetry of Time, each equipped with superb movement, automatons and superlative decor. The first watch was unveiled in 2007, followed by another in 2009 and a third in 2010.

This year, the newest Poetry of Time story continues with  a “his” and a “hers”: the Midnight Poetic wish and the Lady Arpels Poetic Wish. Each of the timepieces is a masterpiece of craftsmanship and technical prowess, as the brand again pushes the limits of timekeeping to new heights. Each watch features three integrated automatons (moving figures on the watch) that, in addition to being ornamental, indicate the hours and the minutes. What’s more, each watch is a superb 5-Minute Repeater – chiming the hours and then the 5-minute periods since the hour melodiously at will. The watches house patented mechanical movements created by famous watchmaker Jean-Marc Weiderrecht and featuring a central opening for the hammers of the repeater mechanism. 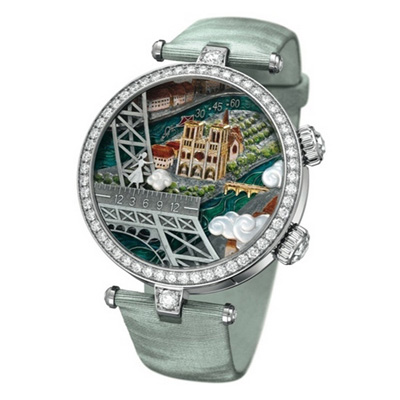 On the Lady Arpels Poetic Wish Repeater (which retails for a smooth $495,000), the silhouette of the young woman on the Eiffel Tower – glancing to Notre Dame in the background — moves slowly to the center of the watch to indicate the hour, a second automaton, a cloud, moves horizontally toward her from the other side. When the two meet, the bells of Notre-Dame ring out to strike the hour. A kite then appears from behind the cloud and flies across the sky in rhythm with the musical chimes to indicate the minutes.

On the men’s Midnight Poetic Wish Repeater, a young man stands on one of the terraces of Notre-Dame—glancing toward the Eiffel Tower — and steps slowly towards the centre of the watch to indicate the exact hour. Again, the cloud moves toward him, and the cathedral bells ring when they meet. In this watch, though, a diamond shooting star appears from behind the cloud and flies across the sky to indicate the minutes.  When the music is done, the three automations resume their initial positions – theoretically according to Van Cleef & Arpels — just in time to make a wish. This watch retails for $580,000.