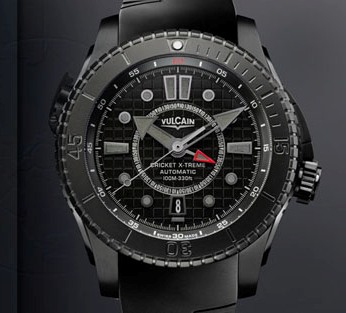 Today’s busy travelers have developed a fascination with mechanical alarm watches – using them in place of wake-up calls in hotels, or as a reminder to take medicine, pick up a child, or run to a meeting. These highly functional watches house extra mechanical mechanisms that make it possible to sound a tone at a pre-set time.

Long a function reserved for clocks, the alarm sound was finally miniaturized and perfected enough to fit into a wrist watch just about a century ago. Eterna Watch Company patented the first alarm wristwatch in 1908,

Eterna filed its patent for an alarm wristwatch in 1904

though it didn’t go into production until 1914. Vulcain, often referred to as the U.S. “President’s Watch,” brought its first mechanical alarm wristwatches into production in 1947. They were the first mechanical wristwatches loud enough to wake a person. Aptly calling the collection the Cricket, Vulcain enjoyed great international attention when President Harry Truman donned the watch in 1947. This marked the beginning of the heyday of mechanical alarm wristwatches.  In that same era – in 1958 — Jaeger-LeCoultre released its first automatic alarm watch – the Memovox (which has since become an icon for the brand), and several top Swiss watch brands launched alarm watches, as well.

Today, just a couple of handfuls of watch brands build mechanical alarm wristwatches, as there are a host of issues involved in their creation. One of the most difficult challenges to overcome in the making of an alarm wristwatch is establishing a loud enough, and long enough, sound.  Some brands offer alarms that sound for 10, 15 or, as in the case with Vulcain, 20 seconds. Other brands focus on overcoming 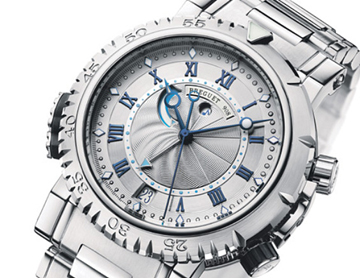 other obstacles. Breguet, for instance, has succeeded in creating an alarm watch – the Marine Royale — that works underwater at depths of up to 300 meters – a useful tool to remind divers when it is time to resurface. Additional obstacles in the building of mechanical alarm watches come into play in the form of how many alarm signals one can program at a time, and how far in advance one can set the alarm. Glashutte Original has developed a system for its Senator Diary watch that enables the wearer to set the alarm function as far as 30 days in advance.