Time Capsules: TAG Heuer Splits the Seconds Ever Further with the Mikrotimer Flying 1000 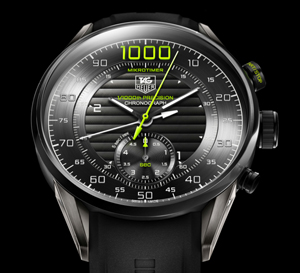 Just a few months ago, when we were in Geneva for the SIHH, ATimelyperspective met with TAG Heuer and reviewed the then-amazing Mikrograph (the first mechanical chronograph to achieve 1/100th accuracy). Recently, TAG Heuer unveiled the Mikrotimer Flying 1000, a new concept watch made entirely in house that is capable of accuracy to 1/1000th of a second.

The 500 Hz watch beats at 3.6 million beats per hour – 10 times faster than the Mikrograph and 125 times faster than most existing chronographs– with the central chronograph hand completing a full rotation 10 times each second.  It has a full 11 patents pending on its innovative technology. Cased in black titanium carbide, its avant garde look and fast-forward timing makes it a stand-out timepiece. It measures 1/100th and1/1000th of a second on the external scales and the central hand indicates elapsed minutes and 5 seconds. The unusual 354-part movement houses no balance wheel system; instead it uses a “Launcher-Hub-Brake” system controlled by a column wheel. The wearer must add together the fractions of a second for a final tally when it comes to totaling the time elapsed – perhaps the only drawback, but its 1/1000th timing is a major advancement. It’s bold but sleek and looks and feels good on the wrist. But remember — it’s a concept watch — a technology announcement. Not available yet for sale, it could take a couple of years to bring to fruition. When it’s ready,  it will cause a stir. For now – seek out the Mikrograph.