Time Capsules: Product – Perrelet Jets Ahead with its Turbine XL 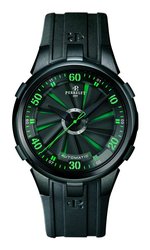 Looking for a little substance in time? Maybe a nice blend of futuristic feel and historical appeal? Well, you just might find it in this all new Perrelet Turbine XL. A massive 50mm watch, this timepiece is the second generation of the Perrelet Turbine that made its way onto the scene in early 2010 as a 43-1/2mm watch. Now, in addition to the larger size and more brazen stance, the titanium turbine blades on the Turbine XL have been changed to look more like that jet engine from which the watch takes its inspiration. The aeronautically designed watch — offered in high-tech DLC, or in titanium and DLC – offers a stealth look for a brand whose roots date back to 1777.

Abraham-Louis Perrelet is credited with inventing the automatic watch in 1777. As such, the brand today only creates automatic movements, and focuses on offering unusual presentations such as its signature Double Rotor watch, which it developed and patented in 1995. The Caliber P-181 (built on an ETA 2292 kit) features automatic winding and offers two rotors — one on 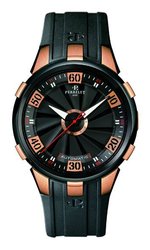 the dial side, and one on the movement side. The watch offers 40 hours of power reserve, houses 21 rubies and beats at 28,800 vibrations per hour. It is water resistant to 5 atm. Naturally there is a sapphire caseback for viewing the movement and second rotor.

The Turbine XL is offered in three striking versions on black rubber strap:  DLC steel (Diamond Light Coating) at $6,650 retail;  titanium and DLC steel  at $6,000 retail. These two models feature a choice of dials options: black with either green (my personal favorite), orange, or white luminous numerals or indices. There is also a limited edition of 77 pieces built in rose gold and DLC steel for $25,900 retail. 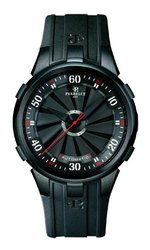 “The plan for Perrelet is to move forward with our unique Double Rotor watches that recall our history, but in a distinctive manner that appeals to a younger customer who understands a fine watch,” says Michael Goldstein, head of Perrelet in the USA.

Perrelet refers to its use of Diamond Like Carbon as Diamond Light Coating, but the concept and process is the same, as is the result – a hardness of 4000 to 5000 HV (Vickers).  Essentially, it is a non-scratchable diamond coating deposited on titanium or steel via an ionic bombardment under vacuum.  The DLC coating is a 1 micron thick deposit of carbon. The Turbine is not the first watch Perrelet has used DLC for, but it is the first full collection. http://www.perrelet.com/.