Animation at the Grand Prix de horlogerieI must admit a couple of things before I launch into the announcement of what  brands and timepieces won the 10th annual Grand Prix de Horlogerie awards – held tonight in Geneva and live-streamed at 12:30 EST, USA.  First, I Loved that http://www.worldtempus.com/ live-streamed the event. Thank you. Second, I’m afraid I missed a great deal of the fanfare, as everyone spoke in French when presenting and accepting the awards – despite the fact that there was a beautiful translator standing by. But I understand the concept – “When in Rome … “  or, in this case, Geneva …

Be that as it may, I’d like to say that – vicariously – it was a wonderful event chocked with emotion, animation, entertainment (the dancing chorus girls were a bid iffy) and even serious tribute.  I, and I am sure the rest of the watch world, appreciated the honors paid to the late Nicholas G. Hayek, and the late Dr. Luigi (Gino) Macaluso.  Bravo. 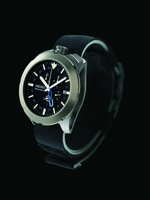 Seiko Spring Drive Spacewalk Commemorative Edition won the Sport categorySo, dispensing with the rest of the fanfare – the winners of the 10th annual prestigious event were fairly predictable – bar one. This year, there were two non-Swiss nominations that made it to the competition. In the Design & Concept category, Devon watch (from America) was nominated, and Seiko made it into two categories. In fact, the Seiko Spring Drive Spacewalk Commemorative Edition watch won the Sport category tonight, beating the Richard Mille RM 027 Tourbillon and the Zenith El Primero Striking 10th. 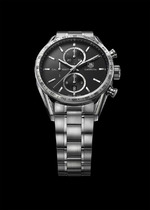 TAG Heuer Carrera Caliber 1887 Chrono won the Under 5000 CHF categoryThis year also marked the introduction of a new category: Watches under 5000CHF. The final three runners up were TAG Heuer, Montblanc (Star 4810 Chrono Automatic) and Vulcain (Nautical), with the winner being the TAG Heuer Carrera Caliber 1887 Chrono. This watch was unveiled to the world in Basel in March, but won’t make its way to stores until early 2011. It retails for $4,300.

The Grand Prize — the L’Aiguiller d’ Or  — most special of all —  went to Greubel-Forsey for its Double Tourbillon 30 Edition Historiques gold timepiece. The watch is a superb rendition of excellence inside and out (and deserves its own moment in the sun -so watch for more details in the coming days). 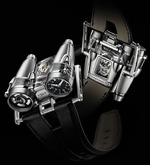 MB&F Horological Machine No. 4, Thunderbolt won the Design categoryOther winners, voted upon by a panel of collectors, watchmaking experts and journalists,  include: 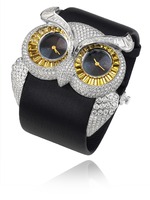 Chopard Haute Joaillerie Owl WatchAnd then there were a few special winners, including: Vacheron Constantin won the Public award (for a traveling global exhibition of 17 special watches), and AHCI – Académie Horlogère des Créateurs Indépendants which the Jury Award, an Jean Francois Mojon who won the best watchmaker of the year honor.