It isn’t everyday that a rich American-historied brand such as Bulova forms a relationship with a global innovator and entrepreneur such as Sir Richard  Branson, founder of the Virgin Group – but Bulova Accutron has done just that. What’s more, during this week’s New York Fashion week, Branson – the brand’s official ambassador – assisted in the debut of the new Sir Richard Branson Limited Edition prototype watch. 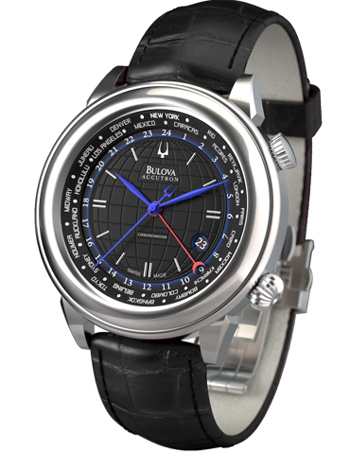 The Swiss-made Bulova Accutron watch is created as a result of the brand’s partnership with Branson. Just 500 will be made, each with his signature etched on the caseback. The COSC-certified movement  is a self-widning mechanical , 21-jewel GMT caliber. The watch is crafted in titanium  and offers a saphire caseback to view the movement.  The stylized dial is offered in black with a globe deisng offerin latitud and longitude lines . The GMT hand is in red and the perimeter fo the dial includes the names of the world’s 24 main city destiinations that corrspond ot he 24 key time zoens. It retails for $3,500.  Bulova will donate a portion of the proceeds from the sales of the Bulova Accutron Sir Richard Branson Limited Edition watch to Virgin Unite non-profit organization. While the watch is amazingly alluring … don’t dash out to the stores yet. It won’t be available until fall, 2012.