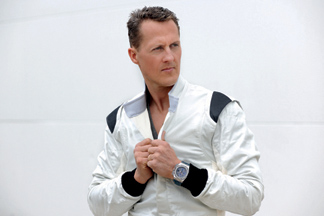 t’s been a big month for Formula One race-car driver Michael Schumacher – who officially confirmed his resignation this month — effective at the end of this season.  The German born racer is a seven-time World Champion and is regarded as one of the greatest F1 drivers ever. Holding a host of records, Schumacher (who had retired once before in 2006) is also a brand ambassador for Audemars Piguet watches – and just today the brand and Schumacher jointly unveiled its newest Michael Schumacher Royal Oak Offshore Limited Edition watches in Germany. 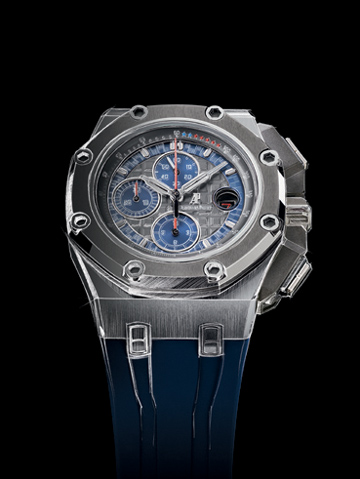 Schumacher was personally involved in the design of the timepieces, spent some time at the Audemars Piguet Manufacture, where he learned more about the making of these stealth watches, and worked closely y with AP’s Octavio Garcia, chief artistic officer (whom we have interviewed here).

A long-time admirer of Audemars Piguet timepieces, Schumacher says “It’s a real honor to have been involved in the creation of this special model of the Royal Oak Offshore and a privilege to lend my name to it.”There is a similarity between car racing and watch making, principally in the fact that it is essential to take care of the smallest details because everything is connected,” says Schumacher. “The performance of each component relates directly to that of another. This means that, in both cases, it is necessary to strive for daring solutions which result in greater functionality.” 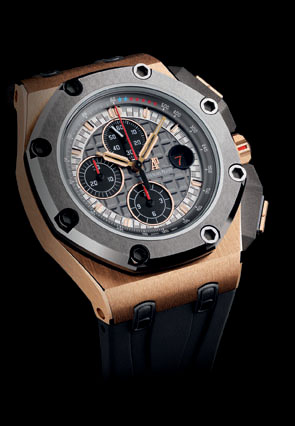 The Royal Oak Offshore Chronograph Michael Schumacher is a tribute to him, and to his strive for excellence and precision. Housed in a 44mm case – the watch is offered in 1,000 pieces of titanium, 500 pieces in 18-karat pink gold and 100 pieces in 950 platinum.  The watch features an anthracite grey dial, with the famed Royal Oak Offshore’s Mega Tapisserie pattern, and – quite naturally in this case – features a tachymeter scale on the circumference with two blue and 5 red stars  symbolizing the drivers’ record seven championship victories.  The minute track features a black-and-white pattern evocative of the checkered flag.  The hour and minute hands are entirely new – inspired by the silhouette of a racing car’s monocoque (single shell frame), in red lacquer with blackened 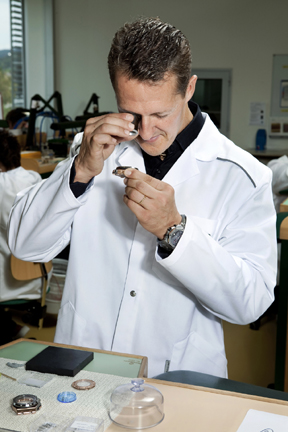 heads.  The bezel lf the watch is a one-piece octagonal created from ultra-resistant Cermet – a material seven times more durable than steel.  The rubber strap is attached by satin brushed titanium studs that emulate racing cars cooling scoops, and the crown resembles a gear wheel.

Inside this super-cool watch is a powerful movement: the Caliber 3126/3840 self-winding movement, visible through the sapphire case back. 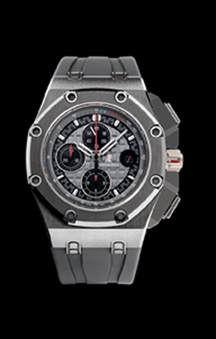 It is fitted with a 22-karat gold oscillating weight decorated with both Audemars Piguet’s logo and Schumacher’s famous “MS” signature. Even the design of the weight is inspired by the race track.

For those true watch and car fanatics, this newest series is a fast-tracked beauty. Prices are not yet available.