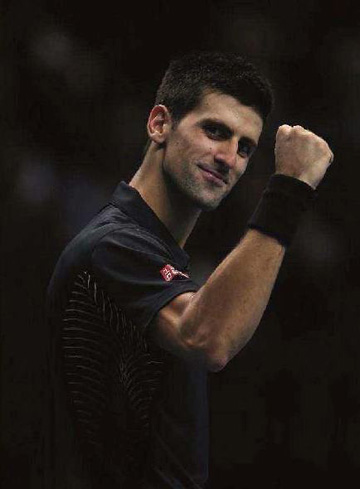 Earlier this week, Audemars Piguet ambassador and tennis great, Novak Djokovic put a firm stamp on his position as world number one with a stunning victory over Roger Federer in the ATP World Tour Finals in London.  Djokovic won with a performance of incredible grit and determination adding the season-ending title to his Australian Open victory and top ranking.

It took him two hours and 14 minutes to win two sets in a game filled with dramatic swings. This is the second time he has won the ATP Finals. For Djokovic, retaining the year-end top ranking felt comparable to his amazing achievements of 2011, when he won three of the four Grand Slam titles and racked up a 43-match winning streak.

Recognized for his role as a UNICEF Ambassador and for his work with the Novak Djokovic Foundation, he was honored the same night with the Arthur Ashe Humanitarian award of the year. The charismatic Djokovic embodies Audemars Piguet’s philosophy, “To break the rules, you must first master them.”

Defining Moments are rare and valuable: they can change the course of life. In his Defining Moment video, Novak describes his incredible return against Roger Federer at the semi-final in Flushing Meadows, New York in 2011. Djokovic – when not on the court – wears an Audemars Piguet Royal Oak.