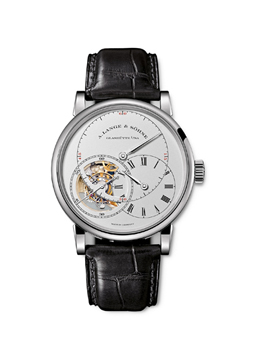 This beauty is a sneak peek — the Richard Lange Tourbillon “Pour le Merite” — to be released at the upcoming SIHH in January by A. Lange & Sohne – and to make its way to the market later in 2011. The fourth distinct watch to house the fuse-and-chain transmission, along with a tourbillon with patented stop-seconds mechanism, this watch is a stunning work of art, elegance and precision from this German legendary house.

The watch takes its design inspiration from an historical piece crafted in 1807 by Johann Heinrich Seyffert and on display in Dresden. The watch reflects Seyffert’s quest for horological mechanical perfection and precision. The dial features overlapping circles that indicate the large minute circle as the dominant element, the smaller subdials for the seconds and the hour – reflecting the precise regulators of the 18th century. In the Richard Lange Tourbillon “Pour le Merite”, the tourbillon cage is revealed in the seconds dial. What makes 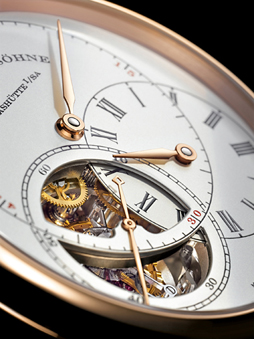 the watch amazing is that there is a special section of the seconds and hour dial that overlaps and for six hours it shows the complete hour dial, then for six hours it retracts behind the hour dial to reveal the entire tourbillon cage! Truly a marvelous mechanical beauty. Thanks to the incredibly efficient fuse-and-chain transmission, the torque and amplitude of the balance is constant across the entire power reserve period of 36 hours.  The hand-finished Lange caliber LO72.1 manually wound movement consists of 351 parts without the chain included, and 636 parts with the chain included.  Just 100 pieces will be made in platinum; it will also be offered in pink gold.  So new, the price has yet to be established. This beauty is definitely one you’ll want to get a waiting list for if you’re a Lange collector, though!