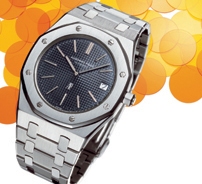 Past: Forty years ago one luxury watch brand stepped out on limb, so to speak. It was 1972 when Audemars Piguet unveiled its Royal Oak – the first luxury sport watch in the haute horlogerie world — offered in stainless steel. Heretofore a gold and platinum brand—Audemars Piguet recognized a need for a sporty chic luxury watch – and realized it had to be different. Not only did the brand seek the visionary design and watchmaking expertise of Gerald Genta in the creation of this watch, but also it employed the use of steel in the luxury market – a pioneering and daring move for a luxury watch brand at the time.  The octagonal watch with its bold appeal was an immediate success and has since become a legendary icon. 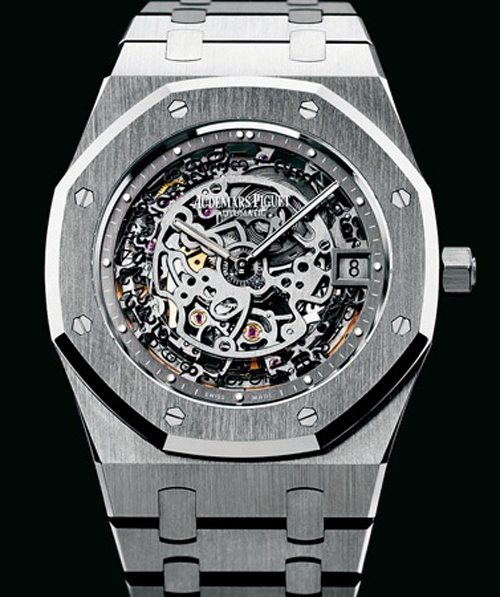 Present: Today, the brand celebrates the 40th anniversary of the Royal Oak- and does so in stunning style, with several amazing new pieces. Among them is the Open worked Extra-Thin Royal Oak Limited Edition 40th Anniversary watch – crafted in 950 platinum. The alluring bold timepiece offers a full front view of the self-winding AP caliber 5122 skeletonized and meticulously finished. The watch is 39mm in diameter recalling the original 1972 Royal Oak that in its day was oversized and majestic. Just 40 pieces will be made.

Also, in celebration, Audemars Piguet has unveiled an exceptional new ad campaign with the phrase: “To break the rules, you must first master them.”  Mastering those rules (and breaking them) is something this inventive, cutting-edge brand is superb at. It broke all the ruse of watchmaking 40 years ago with the ground-breaking design of the Royal Oak. Today, the four characteristics that defined this timepiece are — more than ever distinctive: the octagonal bezel fixed with the hexagonal screws, one of the thinnest self-winding movements, the seamlessly integrated to the case bracelet and the tapisserie pattern on the dial.

Future: To celebrate this monumental anniversary, Audemars Piguet is planning an elaborate world tour of 100 historic watches – the first exhibition of which will be in New York City’s Park Avenue Armory March 21-24—and open to the public free of charge. It is the most comprehensive exhibition of rare Audemars Piguet timepieces ever to be seen outside of the brand’s museum in Le Brassus.