A spectacular three-part exhibition in Switzerland displays the science and art of the industry’s foremost automaton-maker and his short-lived dynasty: Pierre Jaquet Droz. It is justifiably called Automates et Merveilles (automata and miracles). 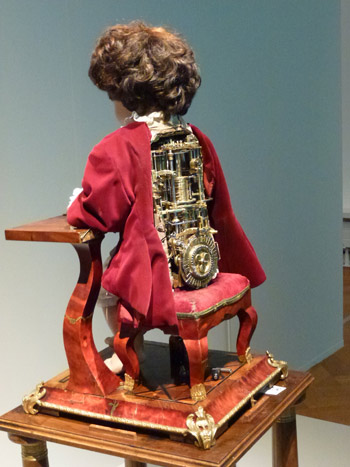 The back of the Draughtsman in Neuchâtel’s Museum of Art and History reveals the complicated set of cams needed to reproduce 40 characters © Worldtempus / Elizabeth Doerr
Jaquet Droz’s modern story began in 1989 when Investcorp, a Saudi-English company that already owned Breguet, Chaumet and Ebel, bought the rights to the name. A new line was conceived, designed, and launched by the makers behind the modern Breguet brand. In 1994 a few of Investcorp’s people went independent, taking the two brands with them and eventually selling them to the Swatch Group in April 2000.

Since then, the Swatch Group’s main concern has been to restore the brand according to its famous roots and give it the attention it deserves. A few years later, the newly founded marque began doing what Pierre Jaquet Droz himself did in the 1700s: use the three surviving androids as a primary marketing tool to generate interest. Back in the days of Jaquet Droz, his son Henri-Louis, and Jean-Frédéric Leschot (the lesser known party in the business), the interest thus raised was needed to sell their main products: small automatons, pocket watches 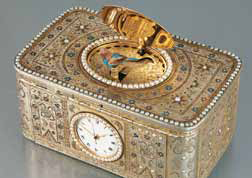 A snuff box with a singing bird created by Jaquet Droz on display at the Musée d’Horlogerie in Le Locle © Automates et Merveilles/Château des Monts and other unusual and unique mechanical treasures.

Today, the Swatch Group-owned brand uses the three historical robots known as the Writer, the Draughtsman, and the Musician to attract interest in its luxury wristwatches, which have a strong, highly recognizable brand identity and increasingly large focus on artisanal techniques. 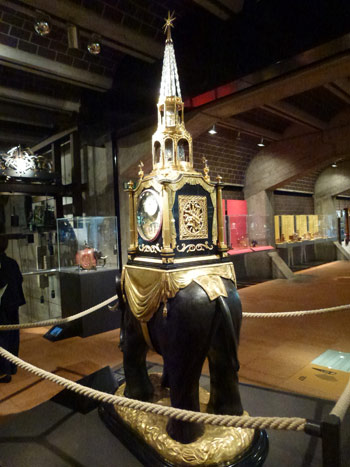 One of a sumptuous pair of automaton carillon clocks on display at the Musée International d’Horlogerie (MIH); four levels of glass create the illusion of moving water © Worldtempus / Elizabeth Doerr The trio of androids begun in 1774 by Pierre Jaquet Droz and continued by his son and Leschot were lost to the modern world after the company ceased trading in 1810 (due to the deaths of the father and son in 1790 and old age of Leschot) until 1906. It was in this year that the Neuchâtel Society of History and Archaeology bought them for 75,000 gold francs. Following restoration and a bit more travel, they reached their current home – the Museum of Art and History in Neuchâtel – in 1909, where they have remained since.

During his active time, Jaquet Droz and his associates traveled with the three mechanical androids to pique the interest of prospective wealthy clients such as royal families. The well-traveled automatons amazed and confused their disbelieving audiences, and more than once were labeled as “witchcraft” with their life-mimicking movements. The Musician, who plays a real organ and actually creates the music written by Jaquet Droz by tapping the correct keys, even breathes (i.e., her chest unexpectedly and rhythmically moves underneath her dress).

Neuchâtel has now built an exhibition around the three androids in the canton’s main three museums. The Musician, on view at the Musée International d’Horlogerie (MIH) in La Chaux-de-Fonds, joins the Writer in Le Locle’s Musée d’Horlogerie Château de Monts and the Draughtsman in its original location in Neuchâtel along with hundreds of other exhibits originating in all three museums, from other lenders such as the Patek Philippe Museum and private collections to form one incredible artistic experience.  The exhibition will continue to run in this form until September 30. The original Jaquet Droz figures and others are activated according to a schedule that can be found here.